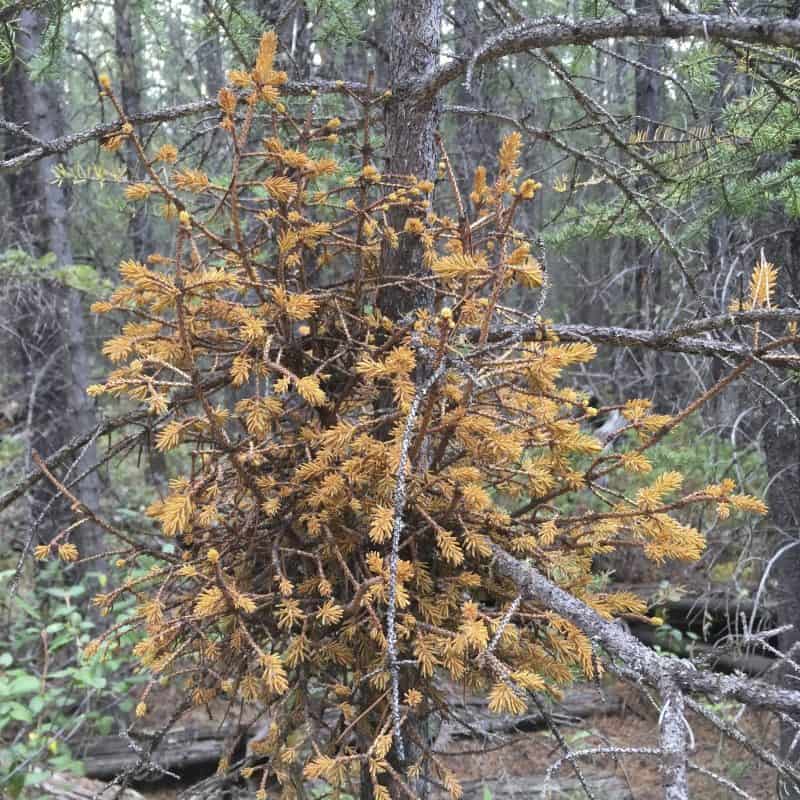 We always associate Halloween with witches on brooms but did you know Mother Nature has her own witches broom?

What Is Witches Broom?

How many times have you looked at a tree and thought “what animal built that nest?”.

I know my boys certainly did when they were younger.

I loved their reactions when I told them that the “nest” is called witches’ broom. My oldest was intrigued, my youngest moved closer to me…because you never know who, or what, really lives in the forest, particularly around Halloween.

Witches broom can grow on any part of the tree, high or low, and there can be one, or many bundles of various sizes on a single tree.

Where Does The Term Witches Broom Come From?

The term witches’ broom comes from the German word Hexenbesen, which means to bewitch (hex) a bundle of twigs (besom): in Medieval times,  bundles of twigs were used to make brooms.

Picture from the net, no copyright infringement intended.

Here is another version of a Witches Broom. We purchased this lovely, handmade broom from the North Woven Broom Company, Crawford Bay, B.C. If you are ever in the area, I would highly recommend you stop by for a visit and watch them make the brooms.

If you want to delve into the source of why brooms and witches are so well associated, then take a look at this article, be warned, this read is better suited for an adult or teenager.  Enough said.

What Causes Witches Broom To Grow On Trees?

The parasitic fungus, called Chyrsomya Arctostaphylos (Source: Handbook of the Canadian Rockies, Ben Gadd) is responsible for these growths.

This fungus produces hundreds of spores, which can be spread by wind or contact, for example, if a Red Squirrel brushed against the spores, they could transfer them to another tree.

Once the spores infect the tree, a budding growth will form on the tree, as shown in the following picture, and the bundle of twigs will grow from this single point.

If you are hiking the Rockies in the late spring, early summer (May, June to mid-July) the full bundle of twigs will look like a group of short yellow needles. This yellow colour comes from the many spores of the Chyrsomya Arctostaphylos fungus.

This Witches Broom is in the spring growing stage. This parasite is not picky when it comes to Confier hosts; this particular growth is on a spruce tree

When hiking in the fall, the needles will turn yellow, much like the Larch Tree needles, and will fall off, which is a winter survival adaptation for this parasite: having no needles to nourish during the harsh winter months enables the parasite to focus on feeding and keeping its “body” alive.  (Sounds spooky!)

The needles have turned a brownish golden, and will soon fall off.

In the winter and early spring (March-April), the mass of twigs will give the impression that a portion of the tree is dead. But it isn’t, it is lying in wait for the warmth of the spring, and the witches broom lies dormant for the winter.

Why Do Some Trees Have Witches Brooms and Others Do Not?

A lot depends on the health of the tree. Think of yourself: if you are healthy, you can potentially fight off any viruses that you are exposed to. The same goes for the tree. Trees already infected with another parasite, or fungus will be more susceptible to Witches Brooms.

The more brooms on a tree, the weaker the tree will be, and it will eventually die. However, in Banff National Park, our climate is arid and the growing season is very short, and the death of the tree could take a very long time.

Other Potential Uses For Witches Broom

Horticulturalists and plant enthusiasts see these growths as great opportunities for diversifying the plant world. Cuttings from these brooms have been used to create many ornamental dwarf species, and many are now commercially available for landscaping. Hum, the creation of another invasive species perhaps?

If you are out Trick or Treating with the little ones tonight, you won’t need to be frightened by Mother Natures Prop; they are harmless to humans.