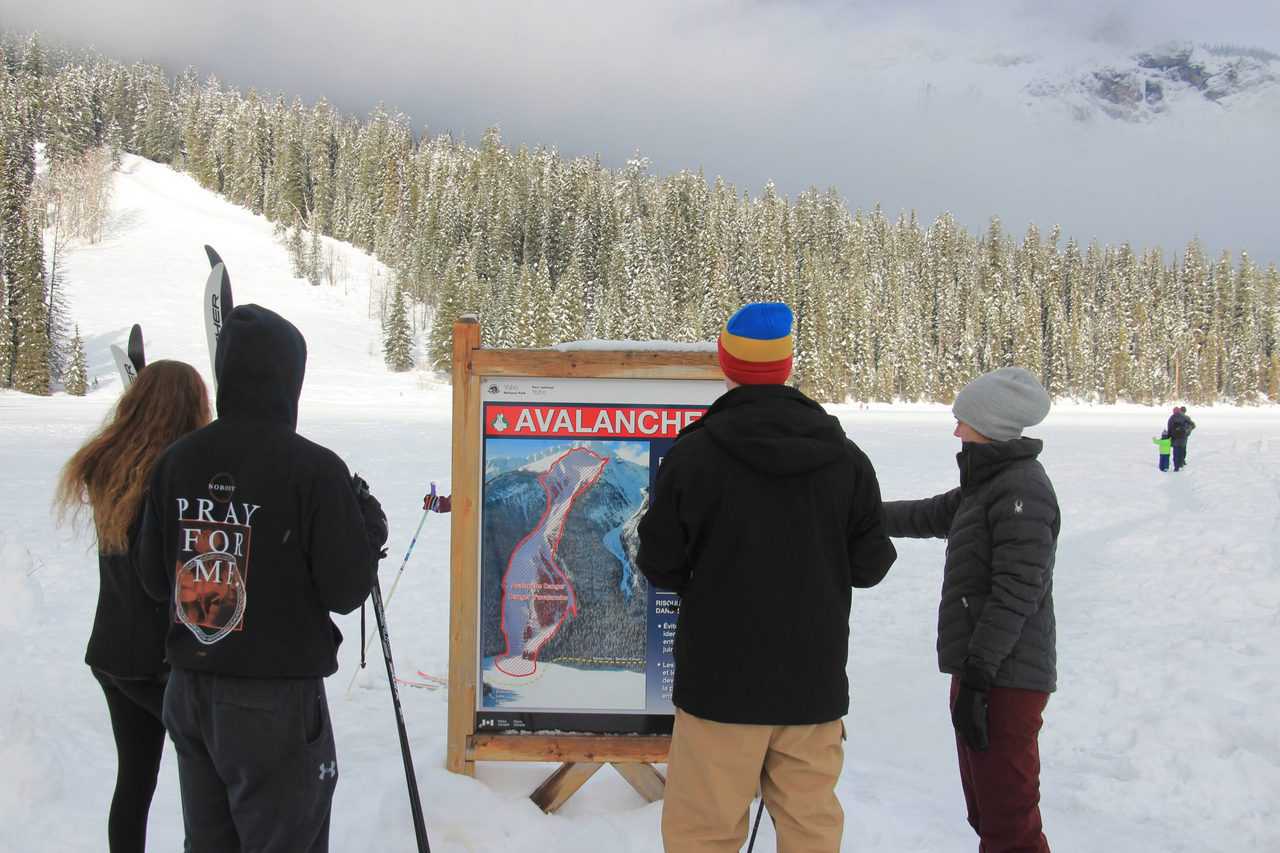 Guide To Avalanche Awareness When Hiking The Rockies

Not all family-friendly summer hiking trails are safe winter hikes

Some of the easy, top-rated and accessible family-friendly summer hiking trails in the Rockies are in serious avalanche terrain in the winter. For example, the Lake Agnes Tea House Trail and Big Beehive trail in Banff National Park, are VERY popular summer trails. Yet, a portion of the trail leading to Lake Agnes and all the trails beyond the teahouse are in prime avalanche terrain.

Sadly, On March 8, 2014, two individuals died in an avalanche at Lake Agnes.

A summary of the facts, taken from the Parks Canada March 2014, Accident Report, notes:

This tragedy could have been avoided if this group had avalanche training.

The following pictures are of Mirror Lake, which is on the trail to Lake Agnes.

This is a popular rest stop in the summer. It is the winter turn-around point if you are not trained or have appropriate avalanche gear: probe, shovel and transceiver.

Lake Agnes isn’t the only trail in avalanche terrain

Here are a few popular summer hikes that you may have been on.

Both of these popular family-friendly hiking trails are excellent summer trails, but come winter they both have serious avalanche risk.

The Emerald Lake Loop trail goes right through the avalanche path. In the winter, there are several avalanche warning signs situated at Emerald Lake.

The following two photos are of Emerald Lake, Yoho National Park in summer and winter.

The summer photo shows the avalanche path that crosses the north shore of the trail.

The winter photo clearly shows that in the winter this trail goes through an active avalanche path.

The following two pictures are of Warspite Lake, on the Mt. Black Prince, Kananaski.

The Mt. Black Prince hiking trail has exploded with summer visitors. In the winter, It is an easy snowshoe, but TO THE LAKE ONLY. Don’t go past the lake, like we did in the winter picture.

Disclaimer: The winter photo was taken in 2014, before I had taken my Avalanche Skills Training 1 course. We blindly followed snowshoe tracks past the lake. Afterall, there wasn’t an avalanche warning sign on the trail, so it must be okay, right? Wrong!

I quickly realized that we were in avalanche terrain and we turned around. My boys were “bummed” because the snow was SO deep, and they really wanted to build some forts and play in it – safety first though! Had I been avalanche aware, I would have done my research prior to this snowshoe. We were lucky!

Plan on recreating in the mountains in the winter?

If you’re considering any sort of winter activities in the Canadian Rockies during the winter, I highly recommend you become familiar with the Avalanche Canada website and take the Avalanche Skills Training (AST) Level 1 Course

I took the Avalanche Skills Training course as part of my winter guide designation.

My big takeaways from this course were:

DISCLAIMER: The information below does not replace taking an Avalanche Skills Training course.  Hopefully, it encourages you to take one.

A. How to identify avalanche terrain

“Avalanches can happen anywhere where the terrain is steep enough. In other words, once a slope is larger than 10m x 10m (about the size of a tennis court), it could have enough snow on it to create an avalanche that’s dangerous to a person.” – Avalanche Canada.

The following graphics, courtesy of Avalanche Canada, show where and how avalanches can happen on different terrain.

Steep Slopes: Most avalanches happen on slopes between 30- 45 degrees.

Photo: permission given by Avalanche Canada

Convex rolls on a slope are trigger points (places where avalanches are most likely to start). Hikers can be at risk when directly under these rolls.

Photo: permission given by Avalanche Canada

Cornices are overhanging masses of hardened snow at the edge of a mountain precipice. They are unstable and should be avoided, whether you are on the ridge, or below it.

photo: permission given by Avalanche Canada

Those areas that look like “ski runs” down the mountain sides are avalanche paths. Avalanches are more likely to reoccur on these paths.

B. Be aware of and able to identify the three different classes of avalanche terrain

The Description, Class and Terrain Criteria are from Parks Canada. In addition, I included Popular Summer Trails in the table below and the corresponding Avalanche Terrain.

You can read more about the Parks Canada avalanche terrain ratings here.

C. Where to find and read the avalanche forecasts

The avalanche forecast tells you how likely avalanches might be on a specific day in a particular area. The forecast is based on the snowpack and the weather. (source: Avalanche Canada)

The following factors all impact the stability of the snowpack.  Living in the mountains, I have experienced all of these factors within 72 hours.

Understanding the weather patterns and conditions most likely to cause an avalanche on your hike can save your life.

The following are warning signs that the snowpack is unstable and a good indicator that avalanches may occur:

F. Learn how to use essential avalanche safety gear: transceiver, probe and shovel

G. Not all trails with avalanche risk have posted avalanche signs

Sherbrooke Lake, in Yoho National Park, is a prime example of a trail that has serious avalanche terrain, yet there is no avalanche signage to indicate that at the start of the trailhead.

AVOID MOUNTAIN TRAILS IF THE AVALANCHE DANGER IS RATED HIGH OR EXTREME.

I cannot emphasize this enough.

Remember that when hiking in the Rockies, and Canadian Parks, you require a national Parks Canada Pass. Prepare before you go! Please feel free to reference my blog post on national Parks Passes in Canada, and how and where to get one.

Pick Up A Copy Of Take A Hike With Your Children

My sold out book, Take A Hike With Your Children, is now available on Amazon as an eBook. Pick up your copy today, and begin exploring the Rockies!