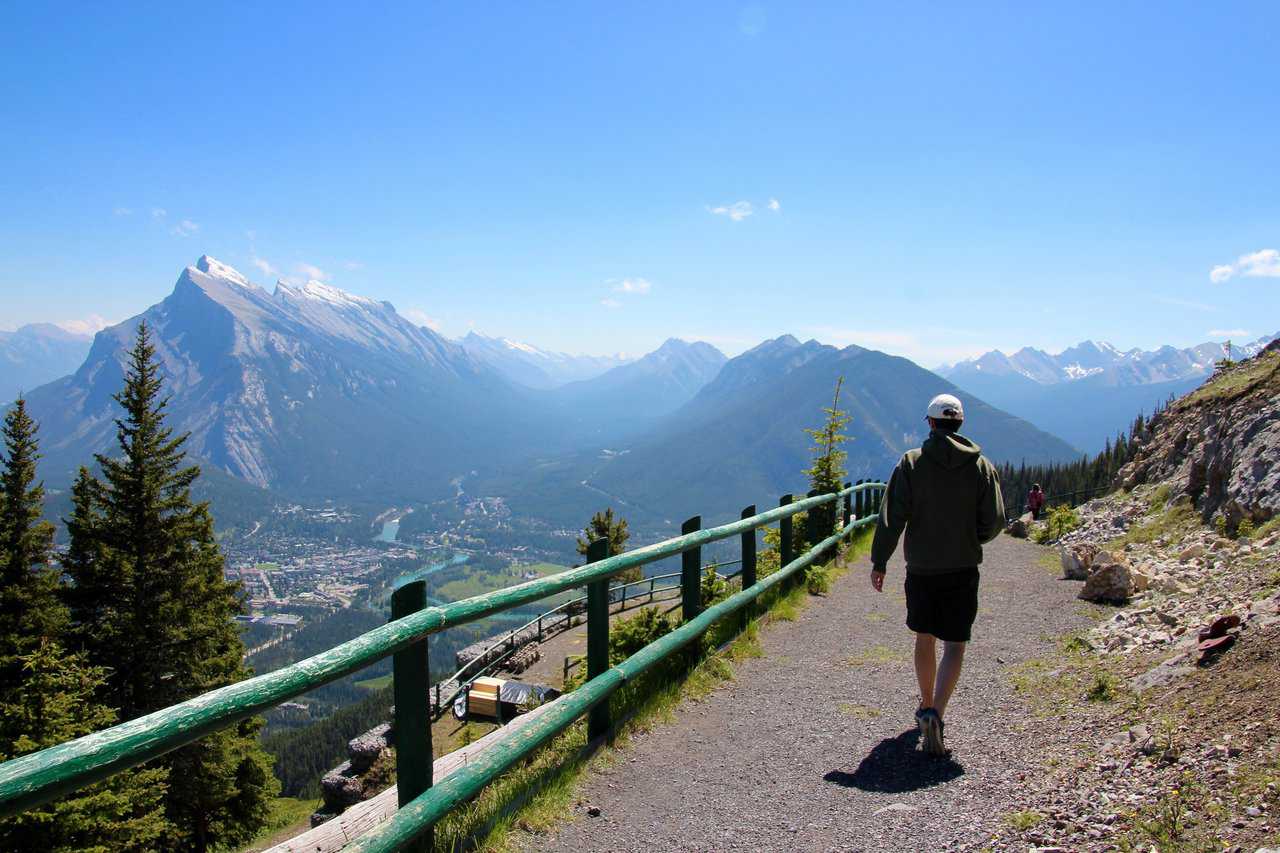 Imagine the views you get at 7000 feet! The Norquay summer sightseeing chairlift whisks you and your family  to almost 7000 feet of elevation for minimal effort. Once at the top, the views are stunning: Mt. Rundle, the Banff townsite and the glacial green-blue waters of the Bow River that meanders through the town are enough to make a moody teen stop and take notice.

There is a short walk from the chairlift to the viewpoint.

Do you have a teen that is a picky eater? I do! “Nah, I don’t want that” , “I’m not hungry”. Ten minutes later: “What do we have to eat? ( while looking into a full refrigerator).”

Take them to the Cliff House Bistro! They will love the menu options. At least my picky 16-year old did.

On this particular visit, my husband and son both ordered the Montreal Smoked Bison Sandwich. My son inhaled his meal. He then had the nerve to ask my husband if he was going to eat all of his meal.

I had the Thyme Truffled Goat Cheese Salad, and because it was a salad, I knew that I wouldn’t be asked to share. My salad was delicious and left me wanting seconds and thirds – salad isn’t fattening – right? Perhaps The Grizzly Paw Orange Cream Soda is.

The Bistro only seats 50 people so call ahead and reserve a table between the hours of 1p.m. -3 p.m. (our waiter passed on that tip). We got very lucky that day as we didn’t have a reservation and still managed to get a table with a great view.

The photos below are displayed on the Bistro’s walls. Can you guess which picture my son described as “sketchy?”. Also, take a good look at the picture on the left and then take another look at the first picture on this blog. You can see how much Banff has grown!

4. Reason Four: You Will Ride in the Path of a Famous Movie Starlet.

In the summer of 1953, Marilyn Monroe and Robert Mitchum filmed the movie “River of No Return.” During her visit to Banff, Ms. Monroe took a ride up the famous North American Chairlift. At the time, it only had room for one person per chair.

Banff opened it’s doors to tourism in the early 1900s. At this time, travel to Banff was for the wealthy. Guests would arrive via the luxurious Canadian Pacific Railway and would stay for three to four weeks at the Banff Springs Hotel. Many were looking for outdoor adventures: hiking and climbing. To accommodate these guests, the C.P. Railroad hired experienced Swiss and Austrian Mountain Guides.

The guides were busy all summer, but winters were slow which meant there was time to ski! We can thank these Swiss and Austrian guides for initiating the development of Mt. Norquay, Banff National Park’s first ski resort. At one point there was also an active ski jump. You can see the remains of the ski jump buildings from the chairlift ride.

The official Mt. Norquay website has more information about the history of this family-friendly resort. FYI – my boys had some of their first downhill ski lessons here.

6. Reason Six: Observe the Antics of Some Wildlife and Some Guests.

The baby bighorn sheep will keep you entertained as they bounce and jump around the chairlift platform and steps.
I have seen Elk, but have yet to see the bears that call these summer slopes home. Perhaps you will be lucky when you visit.

My Observations and Suggestions

This is a chairlift, not an enclosed Gondola. As such, individuals with a fear of heights may not enjoy this chairlift. As a matter of fact, my son, who is an avid downhill skier, said that he had a touch of vertigo when they first downloaded from the restaurant.

There aren’t any hiking trails at the top. There is the Via Ferrata, but that is a guided tour and you need to book it in advance.

You cannot take a stroller on this chairlift, and personally, I would not have been comfortable riding the chair with my boys when they were infants. I recommend that this is an activity you do when the kiddos are slightly older and able to ride the chairlift by themselves.

My son strongly encourages you to go for the view and lunch!

Thank you to Banff Mt. Norquay for hosting us. All words and opinions are my own.