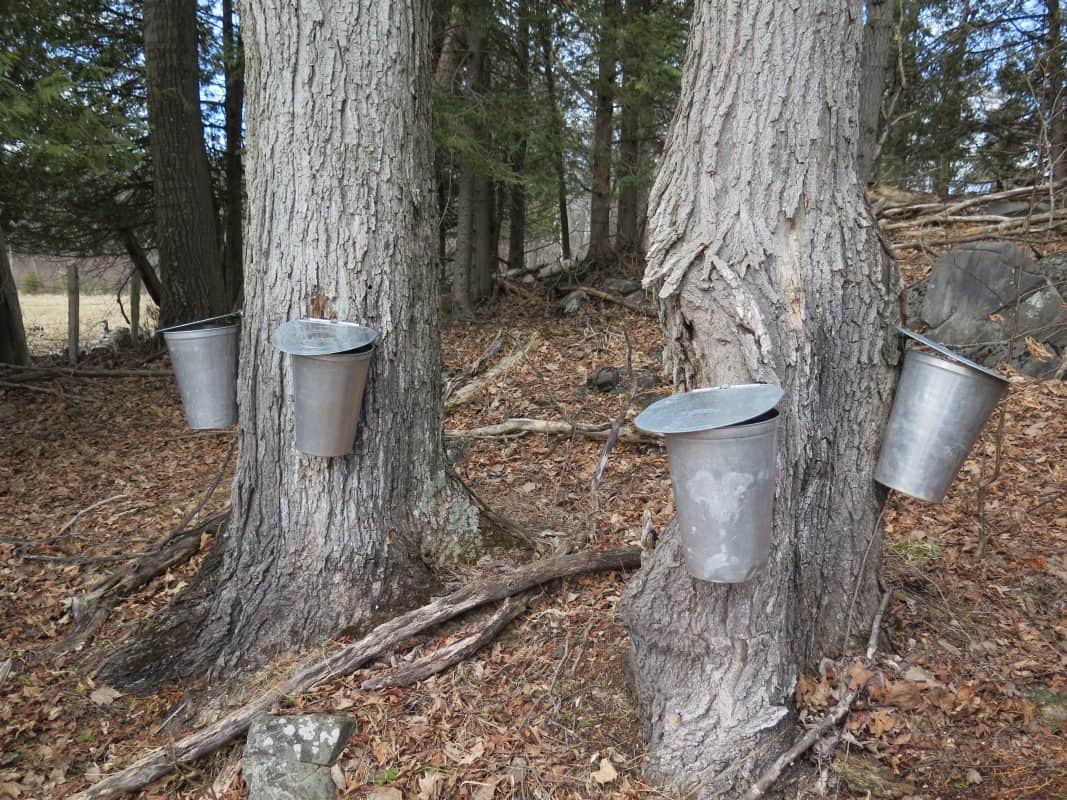 Spring Break 2018, my youngest son and I visited my brother and his family (“the fun cousins”) to help with their annual maple syrup production. My brother’s property is located in Eastern Ontario and is 3/4’s Sugar Bush- a bush consisting of maple trees.

Arriving At The Farm

We arrived late in the evening, and my son was buzzing with excitement. He was spending time with cousins, aunts, uncles and his Nana, more importantly, he would be driving a quad for the first time, which might not be a big deal for some of you reading this, but for a child whose mother is all about “self-propelled activities,” this was huge.

Getting a Lesson on Quad Safety

The morning of the great maple syrup harvest, we had a quick breakfast, which I don’t think he tasted, and followed the cousins to the driving shed. The cousins fitted us with helmets, showed us a few driving skills and, more importantly, the “safety bracelet” on the quads, which stops the engine. There were four of us and four quads. However, my son being the gentleman that he is, kindly suggested that perhaps I ride with him, as he wasn’t sure I could handle a quad. In all honesty, I know he was worried about being embarrassed if I “messed up” driving; he wasn’t really thinking about me.

It was a bright, sunny, warm spring day, and the smell of dirt, that smell that you only get in the spring, filled the air, and so did the smell of the exhaust from the quads. My suggestion to purchase some draft horses to pull the sap sled fell on deaf ears and resulted in another round of questions, and still some doubt, about my “teenage motorcycle escapades.”

Checking The Buckets For Sap

We pulled up to the first set of maple trees and started towards the buckets. A special metal tap, or spigot, is put into the trunk of the tree. The stainless steel bucket hangs from a hook on the tap. My brother taps his trees just after the weather starts to warm up, and he removes the taps once the sap stops flowing.

The first set of buckets were not as full of sap as the second set, and those were close to overflowing with the clear sap.

My son quickly realized that all the buckets on the south side of the trees were overflowing, while the buckets on the north side were not, which is typical, as the sun helps get the sap moving. What makes the sap run? A very basic answer is the freeze/thaw cycle we get in the spring; however, “Maple Sugaring: The Sap Run, by Land’s Sake” will provide you with a more technical answer.

We carefully removed the buckets, trying not to spill too much of the liquid and poured it through a colander into the large homemade plastic bucket and sap sled: this removes any bugs, bark, and dirt that has fallen into the sap.

The Sap is Clear!

The other significant observation was that the sap was clear and not sticky, like the maple syrup you buy at the stores. The cousins also advised against tasting too much of this unprocessed sap, as there can be unprocessed pathogens in it ( my words, not theirs). Boys being boys were far more descriptive. “Aunt Lynda, it will give you bad diarrhea.” Hum, I wonder which one of my nephews had experienced that. No worries, I wasn’t going to drink the sap. I wanted fresh maple syrup, and I was saving every drop! Some people do drink unprocessed maple sap, as they feel it has a lot of health benefits.

From Sap To Maple Syrup

Once the sap bucket was full, we drove off on the quads and pulled the sled back to the stainless steel boiling pan: I was still advocating for the use of Draft Horses. I was still not sharing my motorcycle stories.

The sap was emptied via a plastic line into the boiling pan and brought to a rolling boil. We then waited, waited, and waited, almost 24 hours, until the sap boiled down.

There is a lot of water in the maple sap; it takes 40 gallons (151 Litres) of maple sap to make one gallon (3.7 Litres) of syrup. Making maple syrup is a great family bonding opportunity: outside, teamwork, assessing risk, taking responsibility, and even more so if you had live horses. (I was still pushing for those)

I don’t know how many gallons my brother and nephews collect and produce each spring. I do know that they make enough for a year’s supply of pancake breakfasts, as well as being able to send three large jars of fresh maple syrup home to my older son and husband, who were both suffering from a lousy springtime cold and couldn’t make the trip. Perhaps I should have brought home some unprocessed maple sap as well.

If you have an opportunity to visit a maple syrup farm, I would highly suggest that you put that on your family “To Do” list. You will not be disappointed, and some locations, such as Fulton’s in the Ottawa valley, still use Draft Horses to pull the sleds. I’m still trying to encourage my brother to do the same. All in all our spring break adventure and learning how to tap Canadian maple trees to make maple syrup was an experience my son and I will never forget!