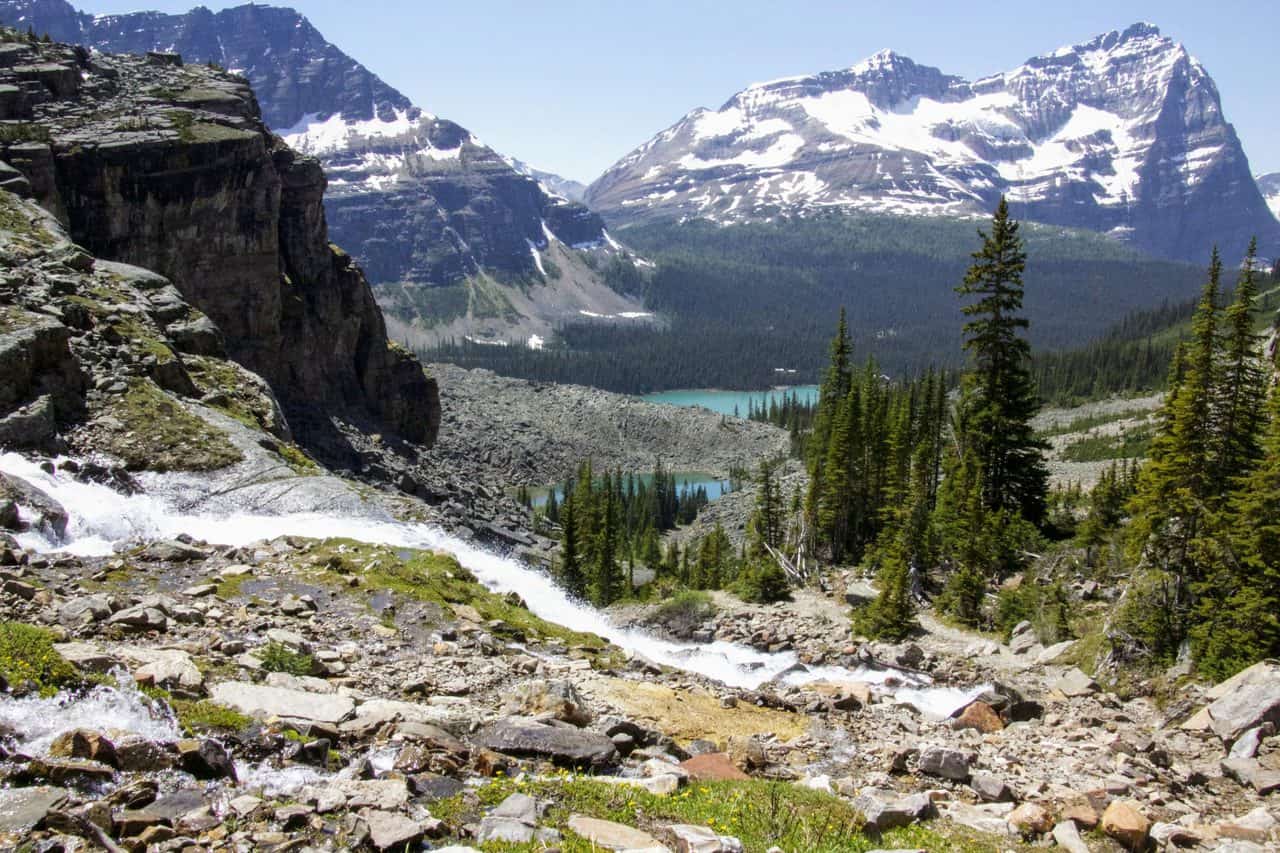 If you are one of the lucky ones that get a reservation on the day bus or a campsite at Lake O’Hara, you will want to consider doing either of these two hikes.

What? A trail primarily above treeline that offers spectacular views from start to finish.

It was our first hike at Lake O’Hara, and it left us wanting more!

After setting up our tents, putting our food and other bear attractants into a designated food locker, my husband announced he wanted to chill and relax in the campground.

When I asked, “why?” My husband came up with some excuse, which I can’t remember. I wasn’t wasting the bluebird day; he could stay behind at the campsite if he wanted. Maybe dinner would be waiting when we returned.

My two intrepid travellers and I enthusiastically headed off for our first of many Lake O’Hara hikes, and my husband quickly joined somewhat apprehensively behind my sons and me.

Take The Well Marked Connector Trail from The Campground

We followed a well-marked connector trail from the campground that took us on a bridge over an outflow creek from Lake O’Hara and onto the east side of the Lake O’Hara circuit.

Initially, we thought we would only stroll around Lake O’Hara and enjoy the views. However, along the way, we met another family who had just come down from Lake Oesa. After a brief discussion with them, I quickly determined that Lake Oesa was our destination for the day. My husband was becoming more enthusiastic about the hike.

After walking approximately 0.8 km along the Lake O’Hara Circuit trail, you will see the path to Lake Oesa branching off to the left. This trail leads up a set of stone steps created by Lawrence Grassi, Lake O’Hara’s park warden, from 1956 – 1960. Grassi was a master trail maker, and yes, he also made the trail in Canmore called Grassi Lakes.

After a steep climb up the stone steps, the trail wiggles through a talus(large rocks) and scree (small rocks) rock slope and starts to level off.

You will hear and see two waterfalls as you continue along the trail. In addition, you will walk past jade-coloured tarns, which are small lakes left over from the glaciers that helped carve out this area.

After a final slight incline, you are greeted by the green-blue waters of Lake Oesa, which in the early season will still have floating patches of ice left from the long winter freeze.

If you hike in late June or early July, you will experience patches of snow along many of the trails in Lake O’Hara, and the Oesa trail is no exception; you might even have a chance to make a snowman.

The views back down this trail are just as stunning. You will be able to see the red canoes being paddled on Lake O’Hara, as well as patches of snow and glaciers dotting the distant mountain ranges.

This trail is shared by people hiking up to the Alpine Club of Canada’s Abbot Pass Hut, 1922. The hut and pass were named after Philip Stanley Abbot, who died from a fall during the first known attempt to reach the summit of nearby Mount Lefroy in 1896. While having our lunch at the lake, we watched two individuals with significant, heavy-looking packs scrambling up the steep scree slope towards the hut.

Unfortunately, Abbot Pass Hut is closed due to significant erosion issues on the land surrounding the hut. It is unclear when it will reopen.

Why Didn’t My Husband Want to Join Us Initially?

Later that night, while enjoying the campfire, he confessed that he was under the impression that the high alpine trails would be out of his comfort zone – they were not, and he completed many more hikes.

Additionally, this was the second summer of my husband’s Parkinson’s diagnosis, so he was unsure that he could complete any of the hikes at Lake O’Hara. He did, and he LOVED all of the hikes we did.

What? A hilly and rocky trail that loops past the Lower Morning Glory Lakes, through an alpine meadow and past the Elizabeth Parker Hut.

We started from the campsite on a relatively broad, flat, well-shaded trail to have lunch at Linda Lakes. However, my youngest son had a funny feeling and was concerned about seeing a bear on this particular trail. Despite all of my encouragement, he insisted that we turn at the trail junction to Morning Glory lakes and head back to Lake O’Hara. Sometimes you need to pick your battles, and as we hadn’t been on this circuit yet, I figured I could hike to Linda Lake the following year. I’m still trying to get there.

The rugged trail meanders through a rock pile left by the glaciers, across several log bridges and past the Morning Glory Lakes.

It opens up to a beautiful alpine meadow where the iconic Elizabeth Parker Hut is located. This fragile meadow was once the site of random car camping, which resulted in extensive damage to the fragile ecosystem. Random camping stopped, and parks implemented the shuttle bus.

We eventually came out by the Les Relais day shelter, purchased a few treats and enjoyed them on a bench on the shores of Lake O’Hara. On our first trip, my youngest forgot his hat. We purchased one from the shelter, with proceeds from the purchase going back to the Lake O’Hara Trails Club.

It wasn’t the hike I had planned for the day, but hey, when hiking with children, you need to make them feel comfortable, you need to be flexible, and this was a pleasant hike.

Getting to the Morning Glory Lakes and Lake Oesa trailheads

Comming in the day bus? You will be dropped off and picked up, in front of the Les Relais Day Shelter. All trails are well marked and start from the shelter.