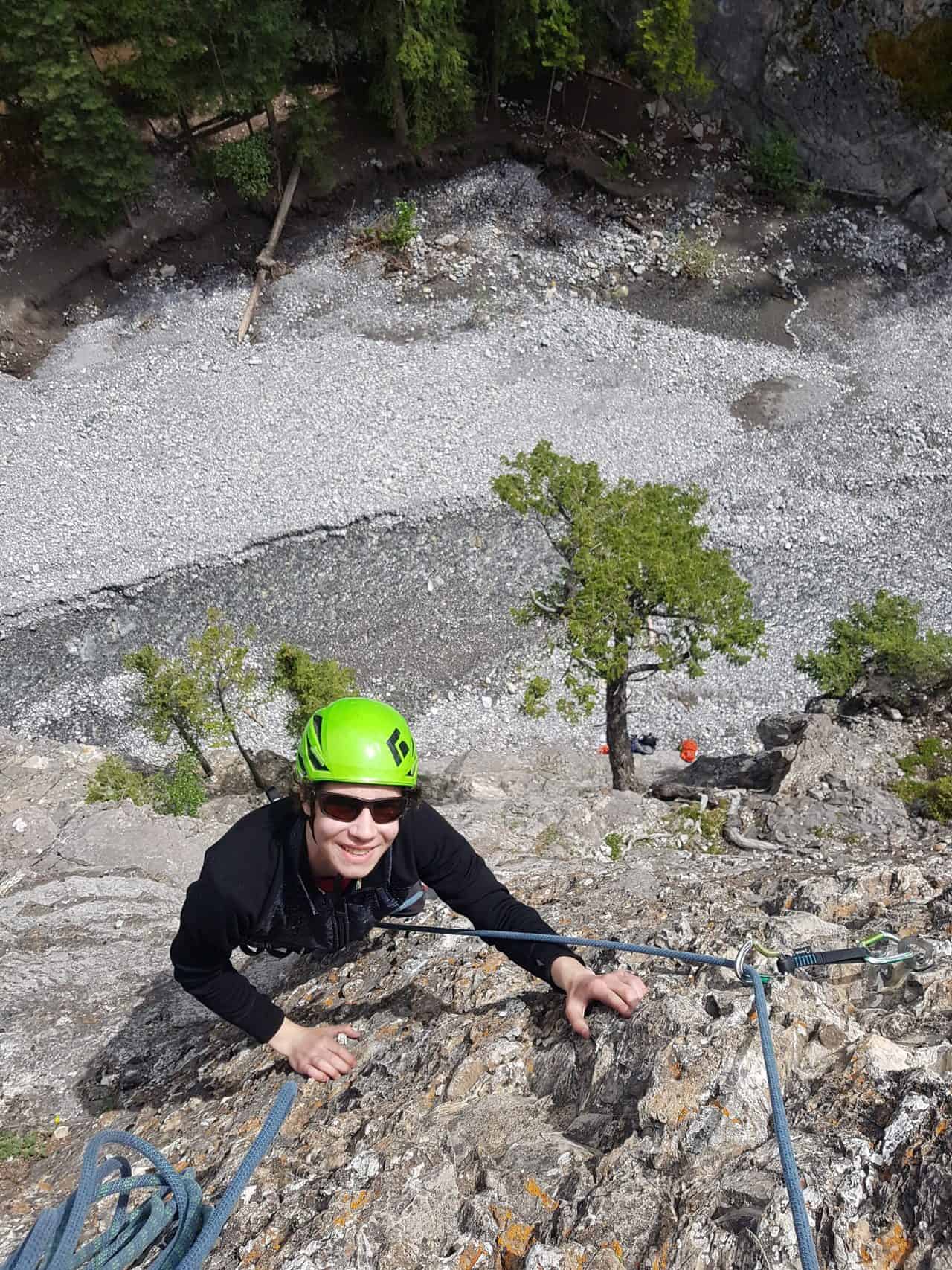 Ashley (Shy) Weeks is the owner and lead guide of Vertical Horizons Guiding. This Calgary-based small business operates throughout the Bow Valley, Kananaskis, Banff and beyond.

Shy also employs several ACMG climbing guides, they too appreciate the support. When you book your kids into a summer rock climbing course at Vertical Horizons, you get to support local entrepreneurs like Shy.

For 7.5 years, she was the Climbing Programs Coordinator and Head Route Setter for the University of Calgary Outdoor Centre. In addition to teaching climbing, she has over 15 years of teaching experience: outdoor leadership, orienteering, wilderness survival, swimming and first aid/CPR.

Shy is also actively involved in the Outdoor Council of Canada and is a Leave No Trace Canada instructor!

My son had taken an indoor climbing course at Elevation Place when we first moved to Canmore in 2013. He was a regular at the climbing gym for about a year and then pursued other sporting interests.

September 2019, he and I did a tour at the Mt. Norquay Via Ferrata, which reignited his interest in climbing, but not indoor climbing, he wanted to try outdoor climbing.

At the end of school in June 2019, he told me he was bored. I told him I had met the owner of a local climbing school. I asked if he wanted to take an outdoor climbing lesson? “Yes!” was the answer.

I contacted Shy, and after some discussion, I booked him for the Rock Basics Climbing course. He was going to climb single pitch sport routes in Cougar Creek in Canmore.

4. Go at Your Pace and Comfort Level

My son was already familiar with the basics. Still, he did need a refresher: how to tie the figure 8 knot, an essential stop knot in climbing. They also reviewed and practised with the GriGri, an assisted braking belay device used in climbing.

He learned how to read and understand the outdoor climbing routes; all of them were single pitch sport climbing routes under 30 m from the ground. Shy pointed out the bolts along the routes, which from the ground were glimpses of metal in the rock. He later informed me that they were bigger than they looked.

Once Shy was comfortable with his ability to belay and use the Grigri, she climbed and set the line on the first route.

While setting the line, she demonstrated movement skills: foot placement, how to look and test for secure spots on the rock for safe hand and foot placement.

After she rappelled back to the ground, it was his turn for his first climb.

This is how my son described Shy as an instructor and what I also observed in the first thirty minutes of the lesson before I had to go to a meeting.

“You are doing great!”…..” But I’m terrified!” was the exchange that I had with my son when he was ¼ of the way up the route. He said he was half-joking about being terrified (he was nervous), but was keen to continue. Shy was quick to respond with encouragement and provided further instructions.

“Look to your right. There is a handhold there.”

These small suggestions provided him with the confidence boost he needed, and within minutes he was half-way up his first-ever sport route, Free Bird, an intermediate 5.8 climbing grade 25 m high.

You couldn’t wipe the smile off his face! I knew he was in good hands, so off I went to my meeting.

6. Experience a Full-Day Adventure That Will Have You Scaling the Spectacular Local Limestone Walls in No Time

That is how the Vertical Horizons Guiding rock climbing course is described. True to the course description, he did scale the local limestone walls – four times! These were the sport climbing routes he accomplished in Cougar Canyon. (information provided by Shy)

Wall Name: The House of Cards and routes climbed:

Note – this area is reopening in 2022, while the Town of Canmore installs a 30m high flood retention structure. However, Shy has a LOT more great routes that she can teach on.

7. All Of Your Rock Climbing Gear is Supplied

Shy supplied the helmet, climbing harness, Gri-gri, ropes, and climbing shoes – everything my son needed for his rock climbing course.

Before our scheduled lesson, we received a packing list of personal items that we needed to bring: water, food, weather-appropriate clothing, sunscreen and our own COVID kits.

8. Safety is a Priority

Gear is regularly checked for signs of wear and replaced when needed.

There was a lot of communication before the date: previous experience, comfort level, etc. all of which assisted Shy with planning a suitable location and routes for my son’s first attempt at outdoor climbing.

9. COVID Protocols Are in Place and Followed As Per Alberta Health and the ACMG

We met Shy at the Cougar Creek trailhead and walked to the climbing area.

It was easy to maintain the 2m distance on the trail to the climbing route.

Shy and my son wore facemasks and hand sanitizer was readily available. I stayed 2 m away, observed and took pictures.

Shy also advised me that she disinfects all gear after the climbing sessions.

Our online waiver eliminated any possibility of being in close contact and spreading the virus via paper and pens.

We also signed an online declaration of health and exposure, confirming that we are not currently displaying any signs or Covid-19.

10. A Rock Climbing Course Gets Teens Outside and Active

After the day, I met Morgan and Shy at the trailhead. He was beaming, and Shy said he “rocked it.”

My son was an absolute chatterbox on the way home. I was getting more than one-word answers or grunts – which told me that Shy had “rocked it” as an instructor.

It checked off a lot of boxes for me as a mom of a teen, as my son:

After seeing the joy my son had from this local rock climbing course, I can’t recommend it enough. If you’re looking for something fun for your teens to do, take a look at all of the courses Vertical Horizons Guiding offers.