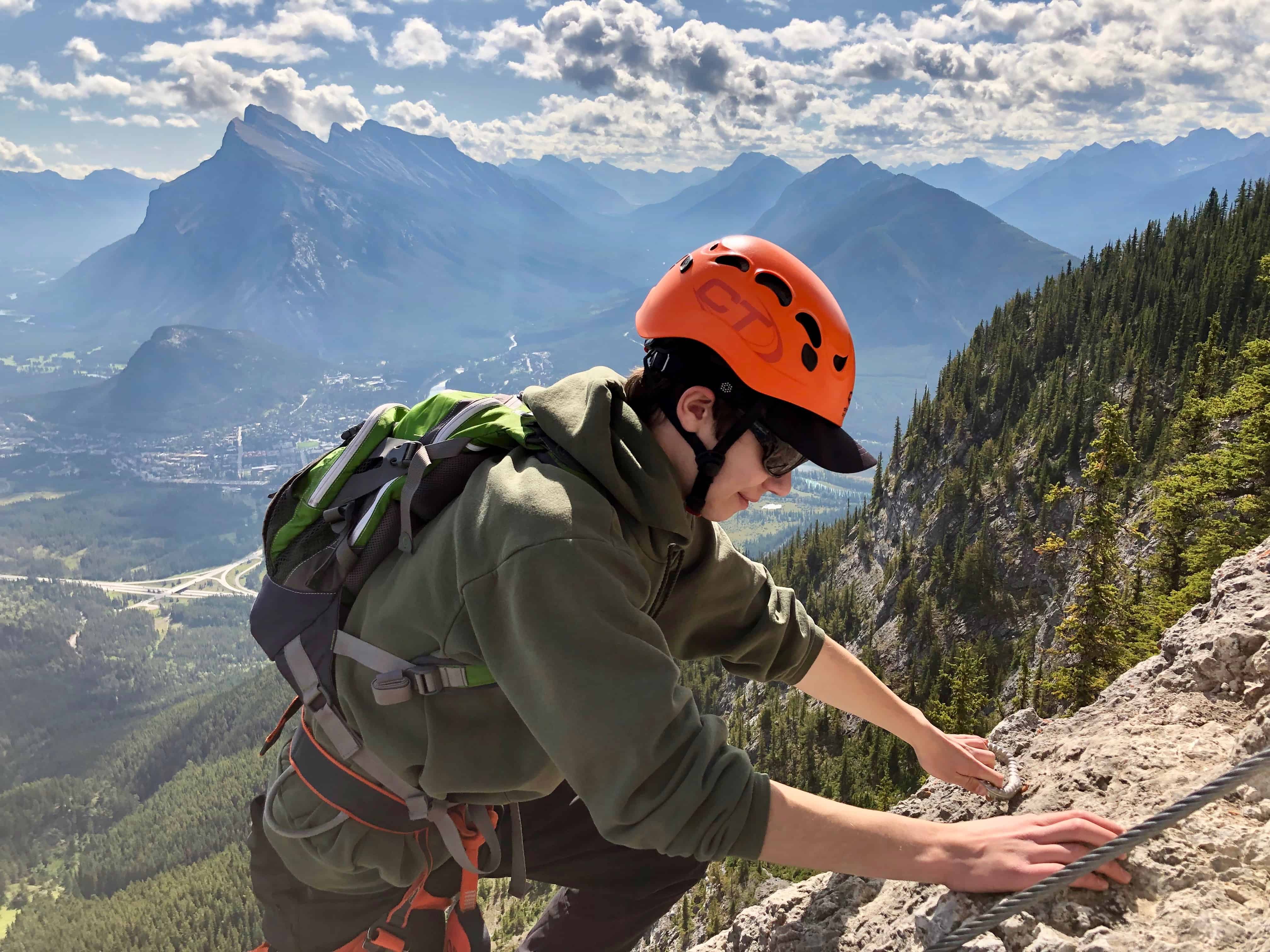 My 16-year old son and I had an amazing time on the Four Hour Ridge Walker Via Ferrata Tour. Here are ten reasons why you should book this tour (especially with your teenagers!) in Banff.

My boys are teens. I find that it is getting more difficult to do family outings: school, part-time jobs, and friends (“no, she is just a “friend”) have replaced some of the activities we did as a family.

Now and then an exciting outdoor adventure presents itself that I know my boys will like.

Also, as much as they won’t admit it, they still like to do things with us if we pay, if it isn’t’ lame, and if there is food involved.

I approached both of my sons to see which one would want to be my climbing partner for the day and who wanted to discover Mt. Norquay in Banff with me.

I knew for sure my oldest, and the more adventuresome of the two would be the first to say “I will.” My youngest claims to have a fear of heights, but much to my surprise, they both wanted to join me. The Banff Via Ferrata had successfully checked one of the boxes on our teen “yes” adventures: “not a lame mom activity.”

Great! I quickly purchased the third ticket, but unfortunately, my oldest son fell ill. It was me and my youngest, yup, the less adventurous one with a self-proclaimed fear of heights. Despite his fear of heights, we had a great time on the Via Ferrata!

2. Reason Two: No Need To Own Gear. Mt. Norquay Supplies All the Safety Gear – Even The Boots!

A few days before our Via Ferrata tour Mt. Norquay emailed a gear list of what to bring for our trip.

My son and I showed up wearing our low-cut hikers, similar to the “good” pair shown in the photo sent to us.

However, after a brief discussion with the check-in staff, we both decided to use a pair of their high-top Lowa boots – the best decision ever!

As the LOWA website states, “it all comes down to grip.” LOWA climbing shoes are well-known in the rock climbing world, and these boots lived up to that reputation.

The hiking boots that both my son and I wore are fine for trail hikes, but after comparing our boots’ flexibility and grip with the LOWA boots, it made sense to switch boots. Also, we were thankful for the extra ankle support on the climb up and the trail back down.

In addition to the boots, Mt. Norquay offers additional free gear, such as rain gear and backpacks, on a first-come, first-served basis.

Our own boots were stored safely at the check-in venue, which was ideal. Great customer service!

David, a fellow Toronto transplant, has lived in the area for 30+ years. He has spent winters as a Heli-Ski Guide in Golden and summers as one of Mt. Norquay’s ACMG certified, Via Ferrata guides.

After some quick introductions, we headed to the gear room for helmets, climbing harnesses and Via Ferrata leashes. We were the only duo in this group that were not matchy-matchy with the helmets. That was a hard “no” from my son.

I noticed Morgan’s expression when David was discussing the safety features of the leashes and harnesses.

I was trying to get a sense of how he was feeling, and if he was still up for the tour, he caught me “being a mom” and gave me “the look.” I knew with a guide like David, we would have an informative, fun and safe experience.

4. Reason Four: Your Safety Is Their Priority

Once off the chairlift, we all gathered around to watch David demonstrate the safe way to clip the carabiners onto the heavy Via Ferrata cable. After some practice and final adjustments of our climbing harnesses and helmets, we set off towards the security gate at the entrance to the Via Ferrata routes.

Hum so far so good. If my son wanted to bail at this point, he could. We hadn’t yet passed through the security gate and into the climbing routes.

Once we passed through the safety gate, we made our way over to the first section of cable. Within minutes we were safely clipped onto the wire, climbing and quickly gaining elevation.

It didn’t take long to get to the suspension bridge and, up until this point, all of us were moving with ease.

Morgan was third across the bridge. At this point, I confirmed what I had known for a while: his fear of heights had been an excuse all this time. Seeing the huge smile on his face as he finished crossing the bridge was so priceless that his “fear of heights” excuse didn’t matter to me.

As I was crossing the bridge, which was the first of my many “take deep breaths” moments, it dawned on me that many mountaineers cross on similar bridges. Where else would I be able to cross a well-maintained suspension bridge and still feel like a mountaineer? Not one other place came to mind.

After I got over the very bouncy suspension bridge, I realized that my inner mountain goat was still struggling to come out. I deliberately decided to take the last position in the group.

Being last provided me with the opportunity to take some photos without slowing anyone down behind me. It also allowed me time to check out some fossils along the way (that is my excuse, and I’m sticking with it!).

Disclaimer: After Morgan watched me tiptoe across the suspension bridge, he willingly admitted that he sometimes made up his fear of heights so I wouldn’t ask him to hike with me. You have to love honesty.

6. Reason Six: You May See Wildlife And You Will See a Keystone Species On Mt. Norquay

On this particular day we saw a cinnamon-coloured black bear grazing on the remaining buffalo berries.

When I pointed out the bear, Morgan gave me the “we live in Canmore, and we see bears all the time” look.

When we got to the very top, 2300 m above sea level, we saw White Bark Pines, a keystone species in our parks, as well as a species at risk.

Mt. Norquay is doing an excellent job of ensuring these ecologically significant trees will thrive in this area.

7. Reason Seven: Mt. Norquay Is A Safe And Fun Way to Summit a Peak

Morgan had a great question: “Mom, is climbing ever that safe?” However, as first-timers on the Via Ferrata, both my son and I felt VERY safe, and it was four hours of pure fun!

8. Reason Eight: Guaranteed to Put a Smile On Your Face

“That was freaking awesome, and I want to do the six-hour route the next time!” That was the “Thank You” I received from Morgan after we completed our tour.

You couldn’t wipe the smile off my face either! Not just because of the fantastic tour and guide, but because I had a great day with my 16-year-old son.

My sons are making plans to do the six-hour Summiter Tour next summer. The Four Hour Ridgewaler Via Ferrata tour gave me some excellent insight into why people climb and why I don’t.

Who knows, if I’m invited, I will join my boys next summer. After all, Mt. Norquay Via Ferrata is one of Banff’s best outdoor mountain activities to do as a family with teenagers and young adults.

9. Reason Nine: Walk Along The Top Of a Ridge On Mt. Norquay

How often does one walk along a ridge without previous hiking experience? Rarely! Once you reach the summit, you follow a pathway across the ridge, hence the name of the tour, “RidgeWalk.”

This is not a big deal for people who hike in the mountains regularly. However, there were a couple on our tour from the state of Georgia, and this was their first experience climbing to 2300 m/7545 ft above sea level.

At this point, you do not need to be hooked onto the cable, but you should still be aware of your foot placement. Stay within the rock-lined pathway.

10. Reason Ten: White-Glove Treatment on The Way Back Down.

After completing the ridge walk, you will start to descend back to the chairlift. This is where you will need to put on the white gloves provided at the start of the tour.

Why? There are sections of cable that you can hold onto. You do not necessarily need to clip in on the way down, and the gloves protect you from any sharp edges on the cable.

In addition, loose rock can really cut your hands up if you take a tumble.

What You Need To Know About Mt. Norquay

What Does Via Ferrata Mean?

It is Italian for “Iron Path.” Personally, I also think it sounds like an Italian Red Wine, which I had a glass of when I got home that day to celebrate.

A very special thank you to Banff Mt. Norquay for the tickets. It was an amazing experience, and yes, these are mine and my son’s own opinions and words.

Pick Up A Copy Of Take A Hike With Your Children

If you’re looking for more activities in Banff, Jasper, Canmore, and in the Rockies with your teenagers, be sure to grab a copy of my sold out book, Take A Hike With Your Children – now available on Amazon as an eBook. Pick up your copy today, and begin exploring the Rockies!